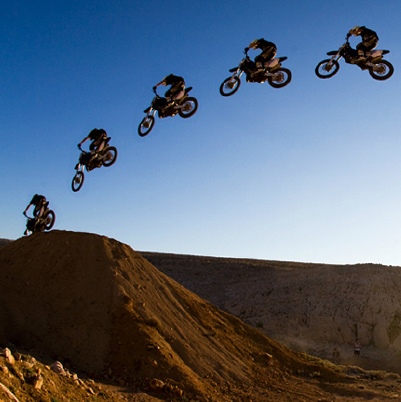 From the desk of Jeff Eberhard:  Whether a particular exclusion of an insurance policy applies can be difficult to determine, particularly if it involves the unspoken intent of a claimant.  In a recent decision by the Oregon Court of Appeals, the Court narrowly interpreted the “Athletic Participant” exclusion and rejected the insurer’s concern over whether the exclusion applies based on the unspoken, subjective intent of a claimant.
Claims Pointer:  To determine whether the “Athletic Participant” exclusion applies, an insurer must objectively inquire into several matters including the nature of the injured party’s activity at the time of the injury, the purpose of the specific activity, and other surrounding circumstances.
Leach v. Scottsdale Indemn. Co., 261 Or. App. 234 (2014)
Plaintiff Leach leased, designed, and operated a motocross course at the Fair and Expo Center in Salem, Oregon that was insured under a commercial general liability policy issued by Defendant Scottsdale.  The track was insured under a $1 million liability policy that included an “Athletic Participants” exclusion that provided:
“[T]his insurance does not apply to ‘bodily injury’ to any person while practicing for or participating in any sports or athletic contest or exhibition that you sponsor.”  (Emphasis added).
Leach routinely held both motocross practice sessions and motocross races at the track.  During one practice session, a rider lost control of the motorcycle that he was riding, was seriously injured, and sued Leach.
Leach tendered the complaint to Scottsdale.  Scottsdale denied coverage and refused to defend or indemnify Leach in connection with the suit, arguing that the “Athletic Participant” exclusion barred coverage.  The lawsuit involving the injured party was eventually settled for a stipulated judgment of $1,500,000, which created a number of other issues regarding assignment that were addressed in a previous case update “Anti-Assignment Clause in Policy Prevents Insured from Assigning Rights to Third Party.”
After the underlying case was settled, Leach sued Scottsdale for breach of contract based on its denial of the duties to defend and indemnify.  Scottsdale moved for summary judgment arguing that the injured party’s injuries fell within the parameters of the “Athletic Participants” exclusion.  The trial court granted Scottsdale’s motion.  Leach appealed.
On appeal, the Court determined that the applicability of the “Athletic Participant” exclusion which formed the basis of Scottsdale’s denial turned on the interpretation of the phrase “practicing for” as used in the policy.  The Court applied Oregon contract interpretation law, analyzed similar cases from other jurisdictions, and adopted Leach’s narrower interpretation of the exclusion, finding that the injured party must have been “practicing for or participating in” a particular athletic contest or exhibition at the time of the injury in order for the exclusion to apply.  The Court further stated that this conclusion was supported by a broad “Athletic Activities” exclusion in the Medical Payments provisions of the policy that would have applied to claimant’s injuries.  The Court dismissed Scottsdale’s concern that such an interpretation would rely on the unspoken, subjective intent of the injured party by finding that such a determination could be made from analyzing the objective circumstances of each case.
In addition, the Court rejected another of Scottsdale’s arguments that Leach thought the policy only covered spectators, as opposed to riders, and that therefore; Leach was not entitled to coverage for riders.  The Court found that interpreting an insurance policy is an issue of law for the court based on the “four corners of the policy without regard to extrinsic evidence.”
Having concluded that Scottsdale had construed the “Athletic Participant” exclusion too broadly, the Court noted that whether an insurer has a duty to defend depends on the fact of two documents:  the complaint and the insurance policy.  The Court found that the underlying complaint was ambiguous as to whether the injuries would be covered under the policy because it did not indicate the injured party’s purpose for being on the motocross track.  Citing the Oregon rule that any such ambiguities must be resolved in favor of finding coverage, the Court found that Scottsdale owed Leach a defense in the underlying case.
Finally, the Court considered whether there was a duty to indemnify based upon the summary judgment record.  The record included testimony that, when considered in a light most favorable to Leach, would permit a finding that the injured party was not “practicing for” a competition.  As a result, the case was sent back to the trial court to determine if the exclusion applied.
Case updates are intended to inform our clients and others about legal matters of current interest. They are not intended as legal advice.  Readers should not act upon the information contained in this article without seeking professional counsel.

Construction & Development, General Contractors, Subcontractors Washington Court of Appeals Addresses when a Construction Contract Can and Cannot be Terminated Without a Remedy Period Wednesday August 26, 2020 By: Michael Staskiews
This site uses cookies to improve your user experience and to provide you with content we believe will be of interest to you. Detailed information on the use of cookies on this website is provided in our Privacy Policy. By using this website, you consent to the use of our cookies. Accept