Washington Case Law Update: Proving Causation: An Expert in a Premises Liability Claim May be Sufficient

Washington Case Law Update: Proving Causation: An Expert in a Premises Liability Claim May be Sufficient
From the desk of Kyle D. Riley: To bring a claim for negligence Washington courts require the plaintiff to show duty, breach, causation, and damages. If the plaintiff loses consciousness and as a result, does not remember what caused the fall, can the plaintiff still prove causation? Read on to find out.
Claims Pointer: In this case arising from a fall near the exit door of the Mariners Team Store, the Washington Court of Appeals held that underlying testimony along with expert testimony was sufficient to establish proximate causation even though the Plaintiff could not state how or where she fell.  This case serves as a reminder that expert witnesses can create sufficient evidence to establish causation even when there is a lack of testimony about how a fall occurred.
Mehlert v. Baseball of Seattle, Inc., Et Al., No. 75839-0-I, Washington Court of Appeals Div. I (October 30, 2017)
Virginia Mehlert (“Mehlert”) was shopping at the Mariners Team Store in downtown Seattle. As she was leaving the store, she opened the door and turned to say goodbye to a store employee. According to Mehlert, she took one or two steps, fell, hit her head, and lost consciousness. Mehlert could not remember how the fall occurred, or what caused her to lose her footing.
The top stair was 76 inches wide. A 37-inch wide plywood ramp was placed over the stairs for wheelchair accessibility, and each side of the plywood ramp had a raised edge strip, about 1 inch in width and 2 inches in height. There were no handrails next to the ramp or stairs, even though handrails were required by Seattle’s building code.  A picture of the condition was included in the case and appears below. 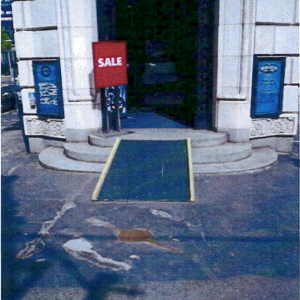 Mehlert sued the tenant and landlord of the store (“Defendants”) for her head injuries. She claimed that the tenant and landlord failed to maintain safe premises. Defendants responded by arguing that Mehlert could not prove causation. The trial court agreed with Defendants and dismissed the claim. Mehlert appealed.
The Washington Court of Appeals reversed the decision. The court explained that to prove negligence, a plaintiff must provide evidence supporting duty, breach, causation, and damages. In this case, duty, breach, and damages were not in dispute, and the sole issue was whether there was causation. To establish causation, the plaintiff must show that the cause is one that: (1) produces the injury in a natural and continuous sequence, (2) is not broken by an independent cause, and (3) without which the injury would not have occurred. Direct evidence or specific evidence of how the injury occurred is not required; plaintiffs may establish proximate cause with circumstantial evidence.
Defendants argued that because Mehlert did not remember why or where she fell, there was no proof that she came into contact with the ramp. Thus, there is no proof that the ramp caused the fall. The Washington Court of Appeals rejected this argument. The court explained that Mehlert’s theory of causation did not require her to prove that she was on the ramp and did not require an explanation of how or why she fell. Instead, Mehlert’s theory of causation was based on the lack of handrails.
Mehlert argued that without handrails, the path from the store to the sidewalk was not safe. Mehlert’s expert witness testified that “if appropriate handrails had been present, Mehlert would have been able to reach out to grasp one, thereby lessening or preventing her injuries.” The expert presented research about the effectiveness of handrails in preventing falls. In particular, one study on loss of balance found that individuals were able to reach out and successfully grasp the handrail over 99% of the time, and out of those that were able to grasp the handle, all were able to recover their balance. Another study showed that the effectiveness of a handrail in preventing falls is not dependent on the need to see the handrail.
Defendants cited to cases where courts dismissed claims because plaintiffs were unable to remember how the accident occurred. The court explained that in those cases, the evidence provided was simply speculation or theory that defendant’s conduct was the cause of plaintiff’s injuries. In contrast, the current record included expert witness testimony along with other evidence that was sufficient proof that placement of a ramp without handrails was a proximate cause of Mehlert’s injuries. Accordingly, the Washington Court of Appeals agreed with Mehlert and reversed the decision of the trial court.
View full opinion at: https://www.courts.wa.gov/opinions/pdf/758390.pdf
Case updates are intended to inform our clients and others about legal matters of current interest. They are not intended as legal advice. Readers should not act upon the information contained in this article without seeking professional counsel.
To email Kyle Riley, please click here.
To view the most recent Oregon Law Update: Using an Expert Witnesses to Defeat a Motion for Summary Judgment, please click here.

Legal Alert Negligence Products Liability Have You or A Loved One Been Exposed to Damages Inconsistent with the Pleading? Wednesday January 5, 2022 By: Melanie Rose

Legal Alert Construction & Development Washington Appellate Court Concludes That a Breach of Contract Claim for Construction Deficiencies Does Not Have a Solid Foundation Wednesday December 22, 2021 By: Gordon Klug

Legal Alert General Litigation Double Jeopardy: Can Contempt of Court in a Civil Case Also be a Crime? Thursday November 11, 2021 By: Jeff Eberhard

Legal Alert ORS 20.080 Attorney Fee Personal Lines PIP UM/UIM So You Paid PIP and the UIM Case Is Going to Trial. Can the PIP Payments Be Disclosed to the Jury and How Do You Preserve Your Offset? Friday October 29, 2021 By: Josh Hayward

Legal Alert Premises Liability Premises Liability: Oregon Expands the Application of Comparative Fault Thursday July 29, 2021 By: Sean Conner
This site uses cookies to improve your user experience and to provide you with content we believe will be of interest to you. Detailed information on the use of cookies on this website is provided in our Privacy Policy. By using this website, you consent to the use of our cookies. Accept